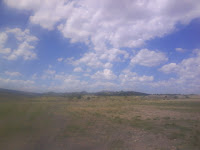 When you're writing, producing, and directing a micro-budget, you're doing most of everything yourself. If you're fortunate, you have SOME help. I do have my girlfriend of 6 years and ABQ local Angelica Morrow producing with me, but ultimately if I stop, we stop. So I can't stop. :)
I'm in Venice, CA for two weeks after 10 days of prep in Albuquerque. The Venice move was a planned vacation that is now doubling as pre-production headquarters. Besides writing this blog, I am writing the script (need to have at least the 1st half of the film written by Friday) and making calls daily to coordinate all shooting activities in ABQ. I hope to have the first 3 or 4 days of our 10 day schedule locked down before returning to ABQ - that will give us a week to plan ahead for days 5 through 10. Not traditionally how one would plan a shoot, but we're run and gun, seat of the pants, guerilla filmmakers - we wouldn't do it any other way. This entire project is no more than a compulsion that we are making a reality. And it's quickly taking shape.
To give you an idea of a prep day 17 days out (17 days from shooting, for those who don't speak film-ese) here's a rundown of my day. This is all post-early morning run and workout on the beach. :)
Update Twitter. Update Blog. Check emails. Today's first emails included two regarding cast members (one of which may not work out) and one from a producer friend in NY re: joining the shoot - it doesn't look like he'll make it. No worries there. Then it's two major calls to potential financiers. Again, we're talking micro-budget, so these are private individuals I know personally that may contribute funds for a backend profit share or simply as a contribution. I have raised 25% of the budget thus far through these types of calls - it's really the only way at this level.
Besides these duties, it's imperative I write 15 script pages by end of day - I envision a 80-85 page shooting script when all is said and done. The 15 pages if I'm lucky will come before mid-afternoon, so I have some day left for other things (basketball on the beach?). If they don't come by mid-afternoon, I resume writing after dinner. In addition to the writing, I will make calls back to NM to touch base with actors, a local producer, and my sound guy to make sure everyone is in the know on where things stand. Nothing is official until the last monies are secured, but I WILL get the money one way or the other...just a matter of when. I also plan to call a local (LA) buddy who's an established actor and ask if he'll come out for 1 stinking day. If he says no I'll kidnap him. What else today? I'm sure there will be other calls and emails as the day progresses, but this is an overview of what we're doing on a daily basis over the next few days while in Venice.
It seems like a lot to do in one day, but that's filmmaking and it's what we love. It's easy to work hard and lose track of time when working on something you're passionate about. I'm very passionate about DESERT RAIN.
Posted by Desert Rain Blogger at 10:42 AM