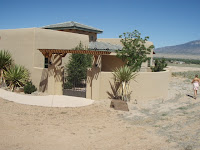 We're trying to make the schedule work for all and the biggest juggle is our lead actor. Since we're no-budge, he needs to maintain shifts at his day job so he can earn cash for rent and keep the job.  At the same time, we need to make the movie by any means, and I'm really trying to avoid nights, though in some cases that's not possible. We're a 10 day shoot, and I'm frantically putting the pieces together to make it work for us and him.
From where I'm sitting right now, everything looks good, other than the lead actor scheduling issue.  We have 75% of the necessary funds in place, and we're about 80% cast. I'm struggling with the idea of bringing an established actor from NY for a small yet central role to the story. He's the perfect look/type but the cost involved and the hassle of transpo/lodging/meals around the clock is making the decision difficult.  I need to let him know by tomorrow.
Locations are coming together.  I have one location that I'm being quite particular about (ROB and DIANE'S place) and my first option fell through.  We found the perfect house on the top of a hill, overlooking the Sandia Mountains (pictured above).  It was for sale, so no residents to deal with, and it was furnished!  The real estate broker was asking way too much to shoot there so we had to move on and we're still looking.  Plenty of time to find it, and that's not bad - one location up in the air with more than two weeks out from the scheduled shoot date.
I'm halfway through the script (some scenes need to be fleshed further) and I hope to have the 2nd half done by Friday, though it's more likely to go through the weekend.  That's fine.  I'm shooting mostly in sequence, so if I deliver Monday, that gives actors more than a week to get familiar with the material.  The dialogue is more a placeholder than anything else.  I expect to rework as we shoot and allow for plenty of improv.  My anxieties over script and story are close to quelled - I feel good about where we are in that regard.  So what AM I worried about?  Not a thing - we're making a movie, not rebuilding a nation!  This is fun stuff and I'm enjoying the process.  My goal is to pass that enjoyment on to all involved in the making of DESERT RAIN.
Posted by Desert Rain Blogger at 9:52 AM