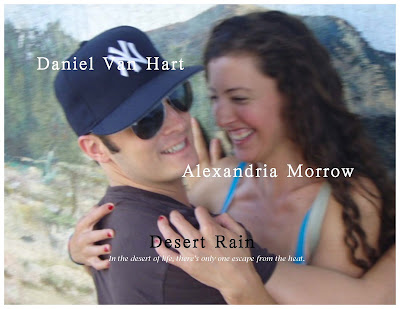 Monies trickling in, slowly but surely. Yesterday was a great day for fundraising, and besides actual funds being promised (about 40% of the budget yesterday) I also found a few good leads to more cash. Definitely encouraging. Raising funds for a film is not easy and I've spent more time making phone calls and sending emails to raise funds than I have working on story and script. That needs to reverse itself real soon. Sure, I have the outline, I know the story, and I have script pages, but actors get anxious without something to work from. Understandable. But I'm of the belief that if we have everything we need to shoot, especially on a project like this - microbudge, guerilla-style - we can find the scenes when we're out there. I like the idea of discovering as we go, within the framework of the outline. Many filmmakers have worked that formula to great success, and I'm confident we can do the same.
Speaking of actors, I got two HUGE commitments yesterday. JAMES MADIO will play a small but crucial role as ROB, SKYE'S brother in-law who refuses Skye and DAN help in the middle of the story, prompting them to kidnap Rob and DIANE'S 5 year-old son, DYLAN. James is a friend and talented actor and I'm thankful he'll be joining us.

The role of LEFTY, the local music producer who has put Dan and Skye in the tough spot they're in by accepting $5000 of Dan's money to promote his demo and singing career, will be played by BREA COLA. I should have preceded this announcement with the classic "SPOILER ALERT "- throughout the film we don't know that Lefty is a woman and former girlfriend of Dan. But maybe I'll change it after all. You'll have to watch and see. :)

JESUS JR., an ABQ local, will play RICO. Jesus is one of the biggest guys you will ever meet, and I'm glad he's working with us, and not against us. The second I laid eyes on him I knew he was the perfect Rico. I was glad he accepted my zero dollar offer to play the part.

Okay, now let me get back to writing the damn script for these wonderful actors.