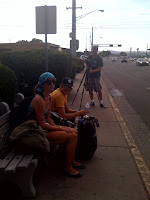 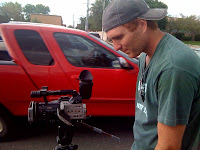 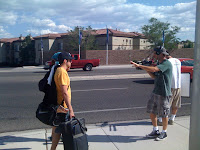 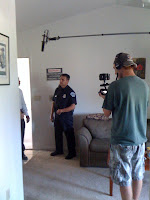 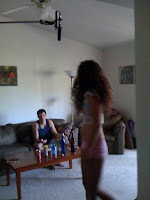 It's been an exhausting week.  Everything happened at once - monies, script, cast, locations, equipment...it all rolled together, a massive wave of happenings.  We went non-stop for the most part. The core of our team - myself, Angie, and Ryan Pearson, a producer who saved our butt on the funding - have averaged about 5 hours sleep per night.  My mantra has become No Sleep Till Brooklyn - we return home on the 11th, hopefully with a completed feature under our belt.
The week culminated with Shoot Day #1 this past Friday, the 28th.  I figured if we got the first day in the books, we could reconvene over the weekend and figure out where we need to shore things up.  The strategy worked well - we spent this entire weekend making the necessary adjustments.  The shoot day itself was a great success.  We completed 8 pages of script in a shade under 12 hours.  Not bad for a 1st shoot day.  Our total crew size is 5, so we're all working like dogs, but we had a blast doing it.
My favorite part of the day was during a company move (moving from one location to the next). I had planned to shoot some road side shots of Dan and Skye trekking through the streets of Albuquerque in the blazing sun, but I also left open the possibility of shooting on a city bus if it came along - it did!  We had 3 bucks in change ready to go, and the 3 of us hopped on the bus, ready to shoot.  There was no objection from the bus driver, so we shot on the bus for roughly half hour.  As we filmed on the bus, our two support vehicles followed the bus as best they could.  It was a great example of the beauty in working small.  It's a liberating thing to be able to hop on the city bus and shoot in real situations with your actors.  The results are amazing - I think we now have the footage for our opening title sequence. :)
Looking forward to Day #2 in the morn.  This week will be a tough one.  We're shooting 7 straight days, with plans to take off next Monday and Tuesday.  Those plans are looking shaky right now as the schedule has tightened up - we may need to shoot on those days after all.  But hey, whatever it takes to get back to Brooklyn with a feature film in our hands. :)
Posted by Desert Rain Blogger at 9:36 PM