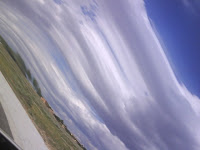 It's official. DESERT RAIN will be filmed on location in Albuquerque, New Mexico from August 28th through Sept 6th, a 10-day shoot schedule. We are writing furiously, casting daily, and securing locations as we go.
DESERT RAIN is a micro-budget feature being written, produced and directed by STEVE LOFF. It tells the story of DAN and SKYE, a young couple in a small desert town who find themselves in a bad situation that only gets worse. On the hunt for LEFTY, a local music producer who scammed them out of $5,000, and on the run from authorities for a faltered kidnapping, Dan and Skye press on through the unique characters and places of Albuquerque in their quest to find Lefty and finally make their break for Los Angeles. DESERT RAIN can be likened to a modern-day Bonnie and Clyde.
DESERT RAIN will be the first film shot under the guidelines of the DECLARATION OF INDEPENDENTS. The Declaration Of Independents is a filmmaking movement designed to empower all filmmakers to realize their stories by any means necessary. The Declaration destroys all unecessary elements and "line items" in the filmmaking process, removing all obstructions, and thus creating a film in its essence - story, image, direction, and performance.
The film is being produced by Steve Loff and ANGELICA MORROW. DANIEL VAN HART and ALEXANDRIA MORROW have been cast as Dan and Skye, respectively.
The film will be shot in DV format and entirely on location in Albuquerque, New Mexico. DESERT RAIN is intended for the 2010 film festival circuit.

DESERT RAIN
In the desert of life, there's only one escape from the heat.